Previews for Ultimate Masters include some of the best cards ever printed: two cards that are restricted in vintage, the primary win condition in one of legacy’s best decks, and the most powerful creature/moon to ever grace the sky.

In their honor, and in the honor of that person (there’s one at every LGS) who calls any powerful card “broken,” we wanted to run down the history of the cards banned in both modern and legacy. 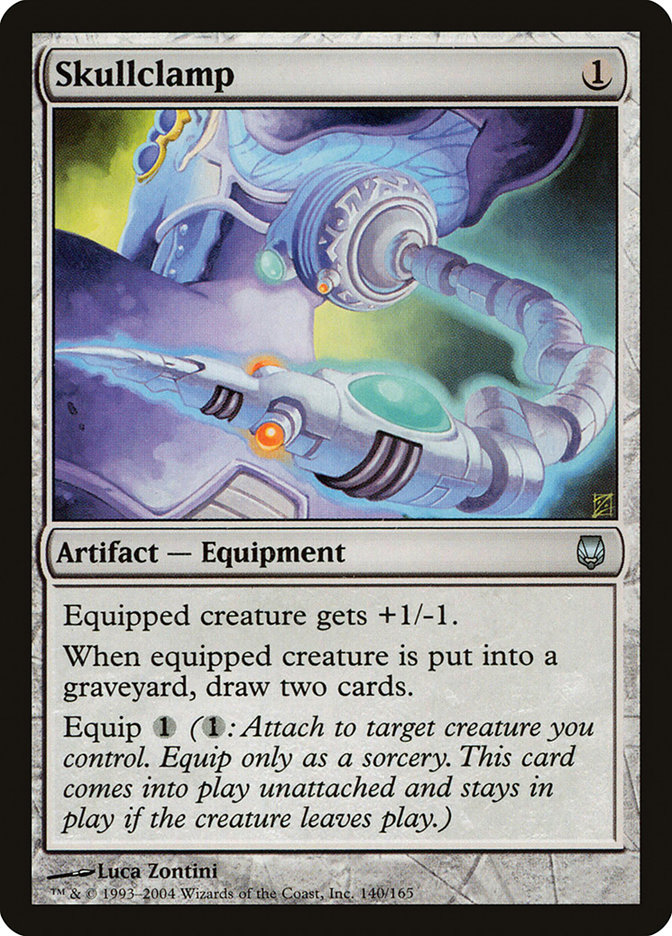 By now, it’s a familiar story: late in development, Skullclamp gave the equipped creature +1/+2. In an effort to nerf the card, they reduced that to give creatures +1/-1 instead. As it turns out, they just made it stronger.

The entirety of both the Standard and Extended formats warped around Skullclamp. Decks either played Skullclamp or were designed to beat the card. Skullclamp Affinity was the most memorable of them all, pairing the card with Disciple of the Vault and Shrapnel Blast for aggressive starts that were still resilient to removal. Elves and Nail and Goblins were also good decks.

Skullclamp was banned at the inception of both modern and legacy. For a quick primer, watch 4x Skullclamp Elves take down the No Banned List Modern Gauntlet of Greatness, besting another 4x Skullclamp deck in the finals.

Skullclamp is a broken card. 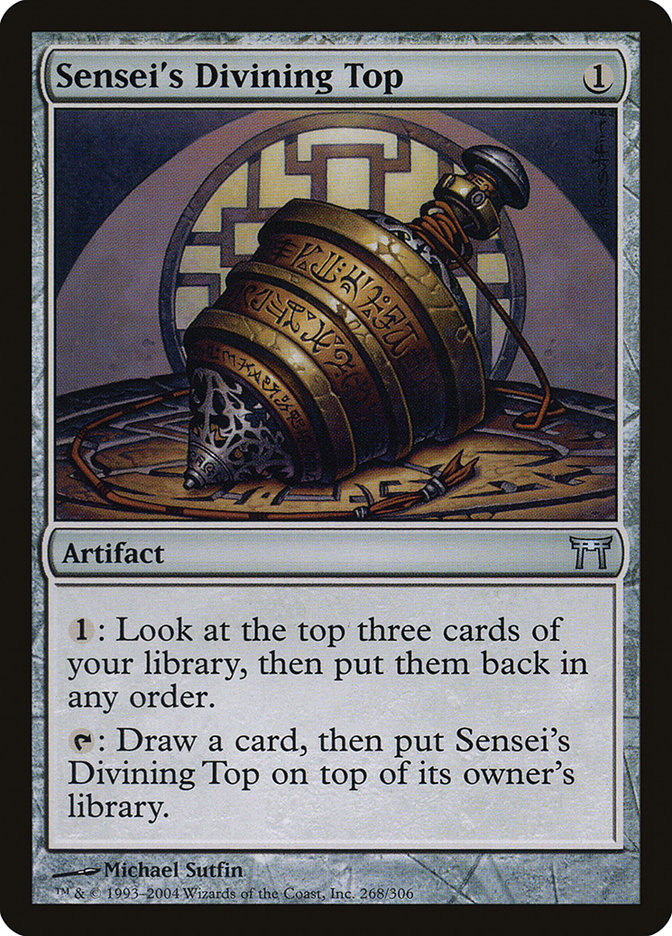 By itself, Sensei’s Divining Top is a fine card. When printed, it was paired with the Onslaught fetchlands to become a powerful card selection engine. Two years later Counterbalance was printed, forming the backbone of one of the most frustrating combos to play against.

The icing on this particularly miraculous cake was spread when Avacyn Restored brought the Miracle mechanic. The recipe starts with a Top. Opponent interaction is prevented with a Counterbalance. If your board state starts to get sweet, Terminus will add some salt to balance it out. Then, long after your spirit has mortared into a fine dust, an end-step Entreat the Angels ends the game in a single turn. 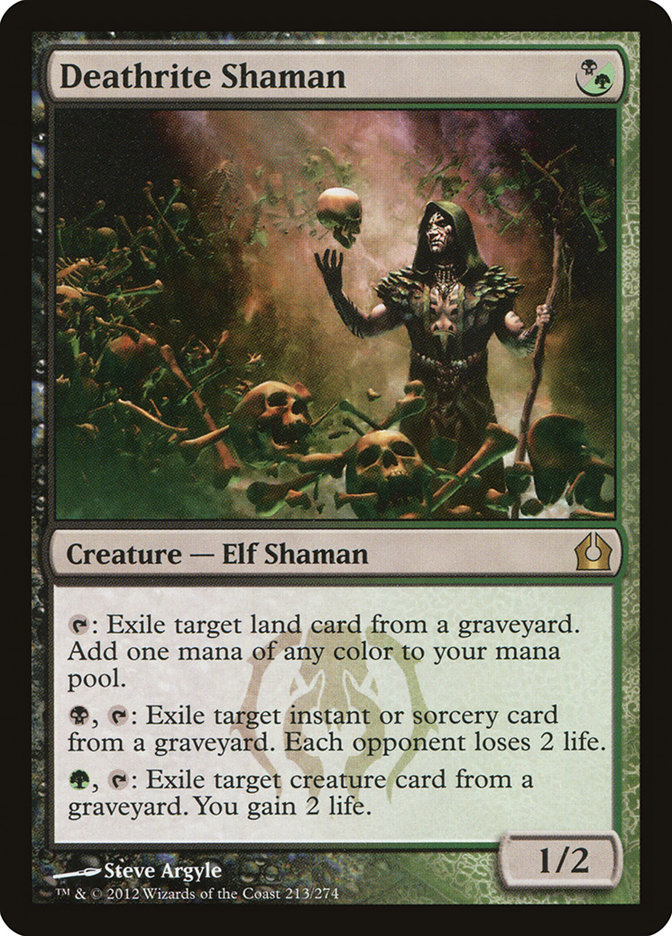 Mana creatures are an important slice of green’s color pie; the ramp brings green players to their larger, more expensive threats ahead of schedule. Llanowar Elves is generally one of the most powerful cards in any standard format that it’s in. They also have a downside: the most effective mana creatures cost 1 mana, and have a correspondingly low power and toughness. This makes them terrible draws in the late stages of a game, when a board position has already been established.

Deathrite Shaman is a big exception to that rule. Tacked on to the mana ramp—which has a cost, but one that is easily paid in formats with fetchlands—it also allows its decks to be more greedy with color requirements. It serves as maindeckable graveyard hate, its second ability can close out the game quickly, and its lifegain ability helps stabilize against aggressive decks. It is good in most every game, in most every circumstance.

Deathrite Shaman is a broken card. 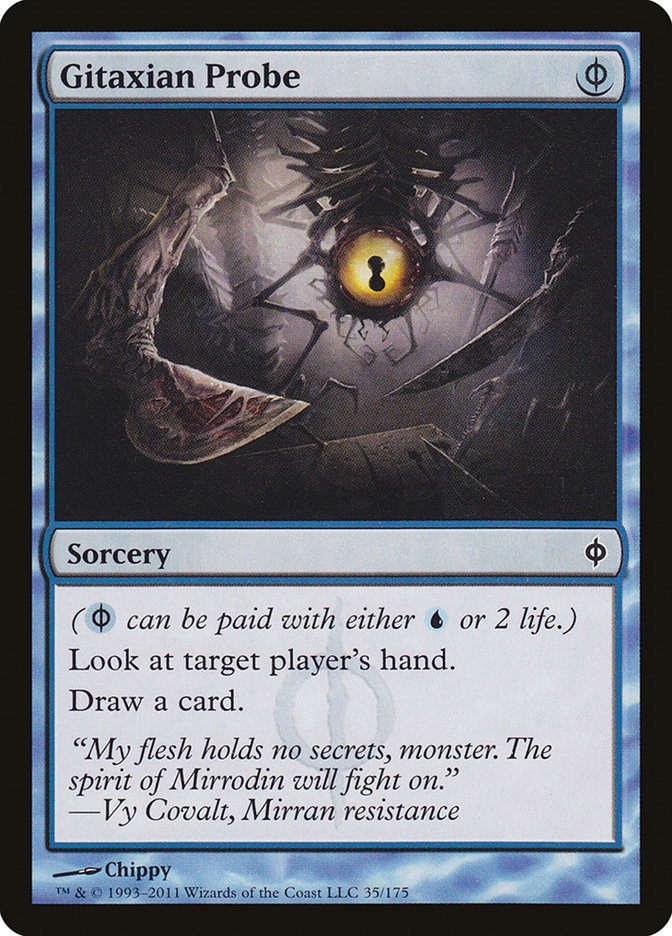 One of Magic’s secret strengths is variance. Though flooding out isn’t fun, neither would it be if every game played out the same way. Deck construction and gameplay rules help with this: a 4-of in a 60-card deck will only be in your opening hand 40% of the time, so you need to account for the times when your plan does not come together as designed. This leads to a wide variety of gameplay, and a much healthier metagame.

Gitaxian Probe does a very good job reducing variance: since it costs zero mana and replaces itself, it allows you to effectively play with a 56-card deck. On top of that, it provides a great deal of value:

Gitaxian Probe is a broken card. 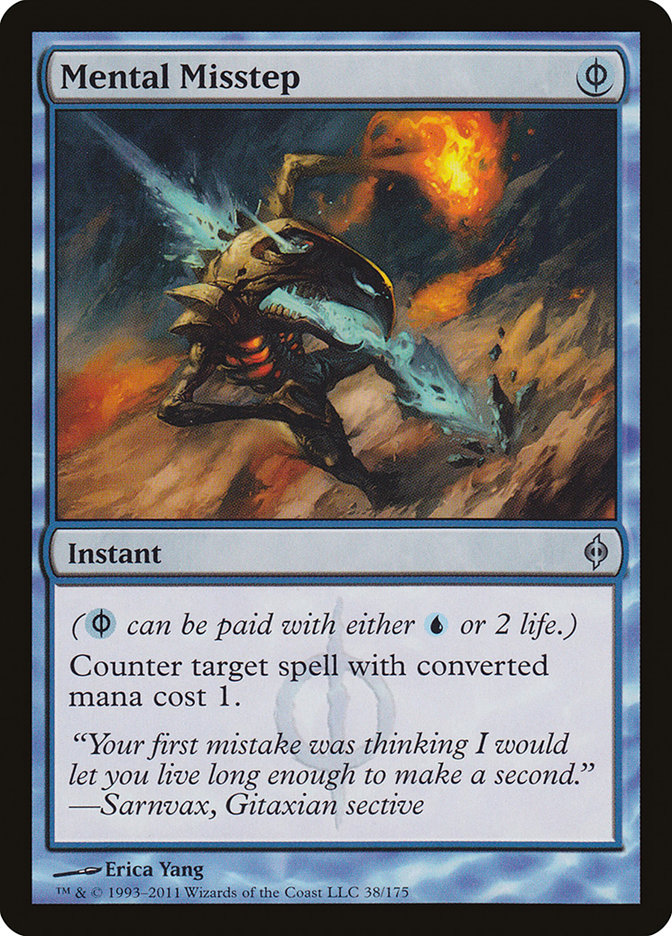 Anyone who played legacy during Mental Misstep’s reign of terror knows why it’s here: it warped the metagame as much as any card that has ever been printed.

Of blue cards that are legal in Modern, Mental Misstep is the most played in Legacy, and it also has one of the more damaging effects on Modern by sitting on beatdown decks that want to start on turn one. We chose to ban it rather than put that much pressure on beatdown decks.

–Welcome to the Modern World

Since it is good against aggressive decks, has no color requirements, and can counter your opponents’ Mental Missteps, aggressive decks also want to play it to protect their primary gameplans. Before you know it, every deck in the format starts with 4 copies.

Mental Misstep is a broken card. 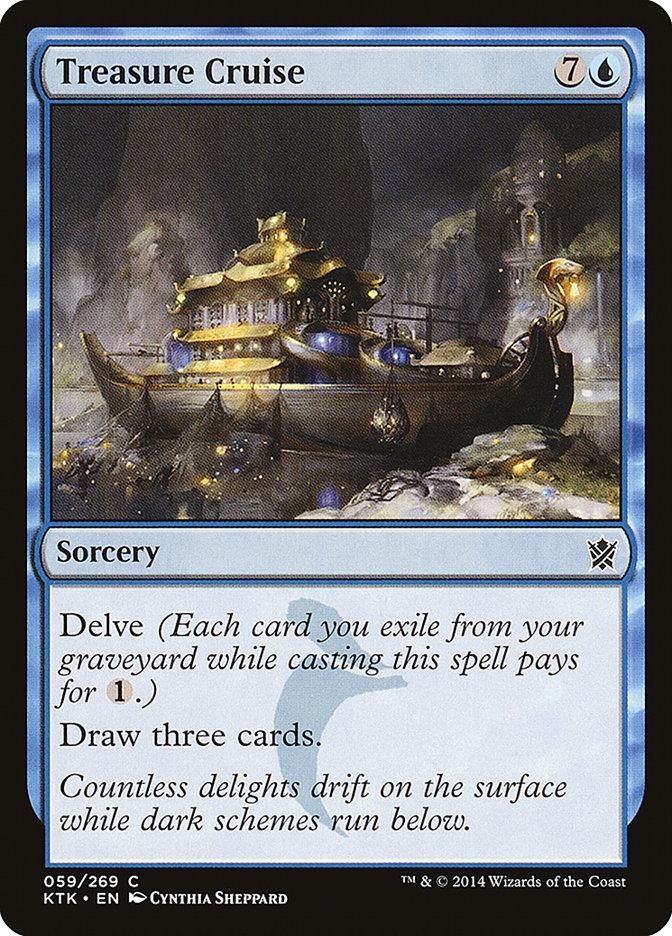 Treasure Cruise pairs a powerful cost reduction effect with the best phrase in Magic for an incredibly strong card. If you aren’t convinced, watch Reid Duke pilot a Modern U/R Delver list and be grateful you weren’t trying to resolve a Tarmogoyf against him.

Treasure Cruise is a broken card. 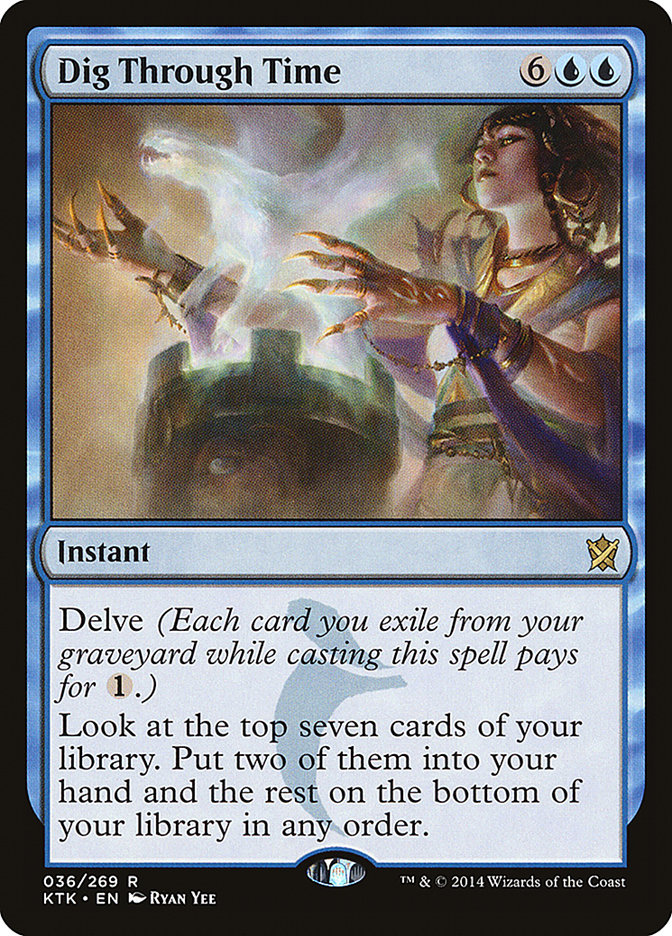 Dig Through Time is, in many ways, the culmination of many of the points this article has made. What does it do well?

Yeah. Dig Through Time is a broken card. 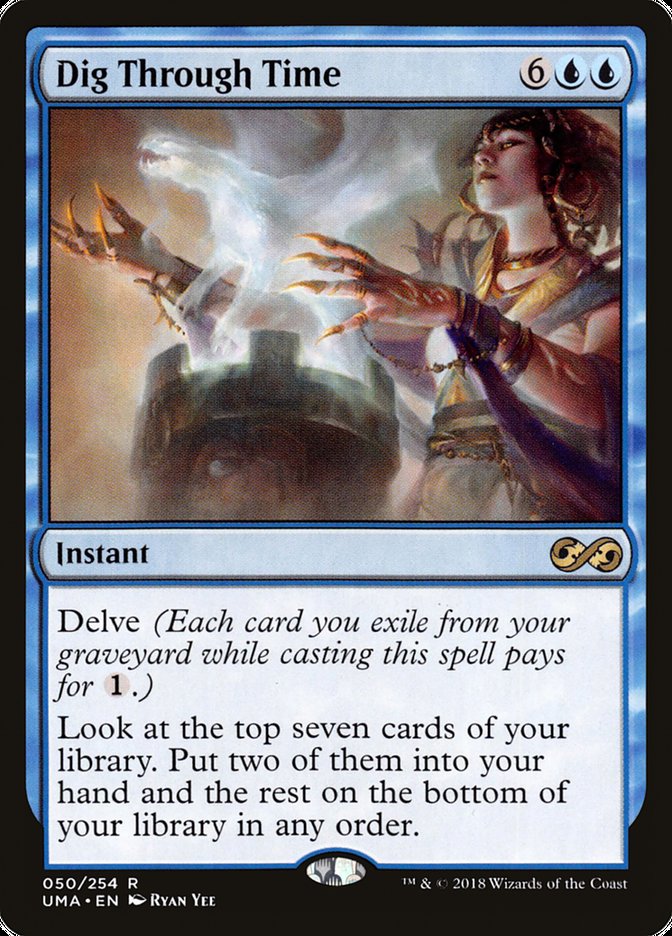 Wizards of the Coast was so kind to as to provide us with an Ultimate Masters card preview of our own: Dig Through Time. Thank you!